It’s December and suddenly it’s almost too late. The lack of shelter makes it risky planting early, wet soil can’t be dug, and then suddenly it’s a race.

I’ve only just planted the zucchini seed – 2 types: Zephyr(F1) and an Italian – Costasta romanesco, in pots in the greenhouse . I’m not crazy about F1 seed because it can’t be saved, but Zephyr is very sweet, keeps producing over a long time, and is pretty: bright yellow with a green end, looking like they’ve been dipped in a pot of green paint. And zucchini crosses madly anyway, so saving seed leads to surprises and not always nice ones.

I found today that the mandarin we call ‘Richard the Ungrateful’ has died.

Admittedly he started life on a clay bank in a brutally windy spot, and then had a pile of wood stacked on him when he appeared to be dead the first time, but since we moved him 2 years ago he has had the best we could provide, and we thought he was coming right.

Luckily we have a Blood Orange waiting to be planted, although I won’t be putting it in without a good look at Richard’s roots.

This weekend I have put in about half of the Kumara (sweet potato), some Sweet Corn for eating fresh and freezing, and about half of the Hokianga Red and Gold Corn. Last night while visiting friends we took the kernels off the best remaining cobs from last year in order to get a good selection for seed. The rest will be made into corn meal as we need it for polenta and pancakes. 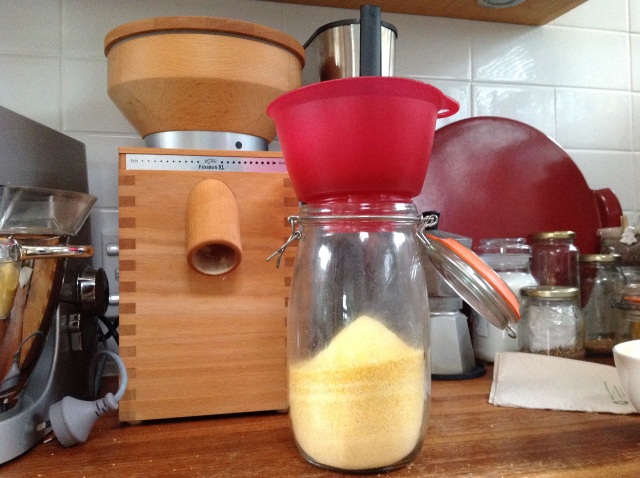 I had hoped to get the parsnips in as well to take advantage of the rain this afternoon, but it wasn’t to be. And I really needed to plant the basil but that didn’t happen either.

Because I let so many weeds grow this winter, even though the soil has been tilled on the surface there were weed roots to remove and compost and sand to be added before Kumara or corn could be planted.

One of the weeds is comfrey, which was accidentally spread by the digger into the vegetable garden. It’s good for the ground, and I think it’s pretty under fruit trees, but it busts up through any mulch, and shades out other plants unless cut back pretty much weekly. In the vegetable garden it’s like an underground octopus and every bit of broken root will grow. Aside from that I had to leave some kikuyu grass and buttercup roots which will need to be dealt with later by mulching and hand weeding.

The rain made it easy for the newly planted Kumara which at this stage are mostly cuttings. I’m hoping that the pheasants will know this year that there are no roots yet, and won’t feel a need to dig them up to check. Last year there were fewer casualties than the year before, when they had obviously tried quite hard to find the ones with the yummy roots.

I’m feeling what someone called ‘gardener’s paralysis’ – I’m kind of glad to be taking all my muddy rain gear back to the city to wash.