It has been a real Monday. It was just me though, the world went well but I was away with the fairies. I blame the dark morning for my late and incomplete awakening, forgetting the camera and then leaving the fridge open and the alarm unset when I left for work.

Long story short my photos are taken with the phone, which did a remarkably good job in the fading light. 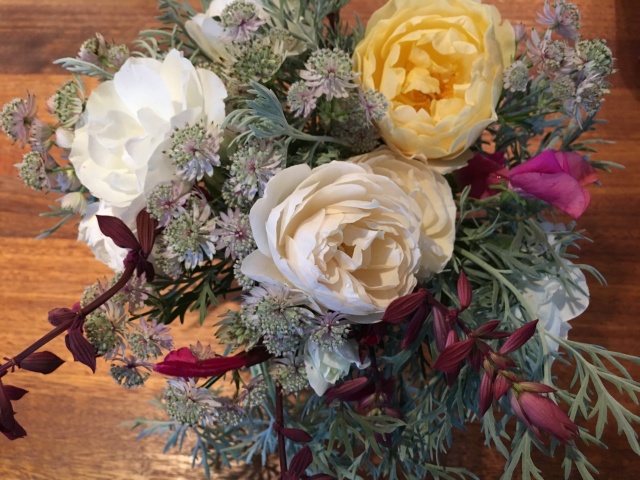 One single Graham Thomas rose appeared on the new bush, which hasn’t thrived in the heat in spite of abundant rain. The Lichfield Angel is better, just beginning to flower again on skinny stems. Only the Iceberg is really going strong.

The last few Sweet Peas and Salvia ‘Wendy’s Wish’ pick up the bits of magenta in the Astrantia. I love my small Astrantia plant, I’m going to get more and try them in different places. Artemisia is always growing over less vigorous neighbours, so is an easy choice for lovely grey foliage.

Inspired by the Spring flowers at Rambling in the Garden I’ve ordered lots of Spring bulbs this weekend; Peony Tulips like Christina has been including in her vases, and fragrant Daffodils as well as more Freesias and Ixia. I see this week Cathy is making bouquets for faeries as well.