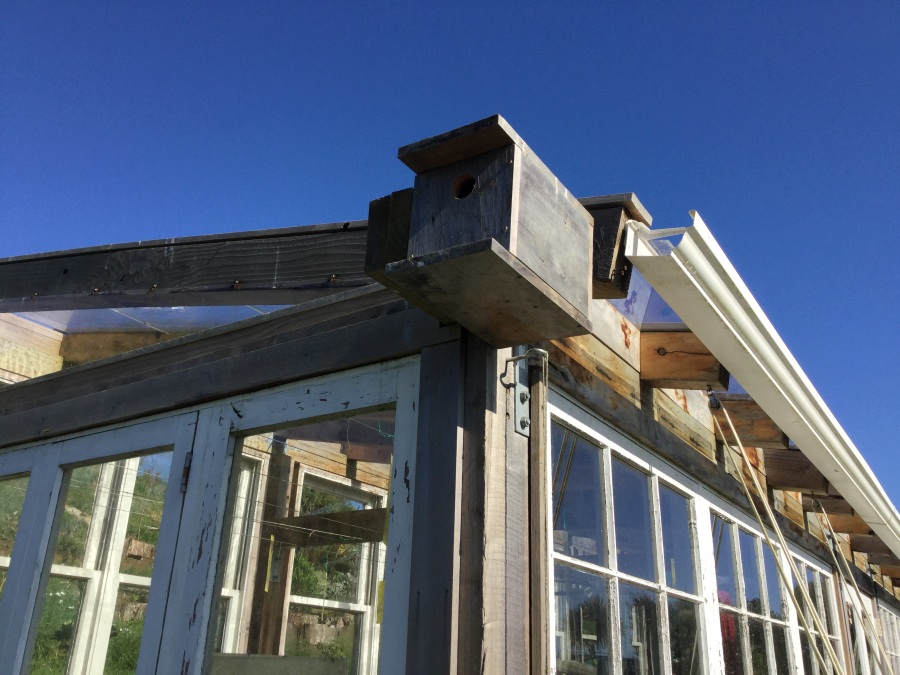 It’s a beautiful clear morning and the sun is up at 6:45. Soon we will go on to Daylight Saving. It should be a good day for pumping water up to the top tanks. Lots of sunlight for pumping and lots of water in the lower tanks.

The starlings were busy early, the one who has protected the favourite next box above the califont all winter sounds like he has a mate. Unfortunately there are clear sounds of a nest being constructed under the solar panels  on the roof as well. This is doomed to failure, even if they do manage to build a nest there (and I will be trying to stop them) it’s too hot by the time the chicks hatch and they won’t survive. It’s usually Mynas which try to nest under the solar panels. I think the Starlings are smarter. I know some people don’t like them, but I do. They are devoted parents and C’s dad says they eat the beetles which are doing so much damage to our hazelnut trees. We put up 3 more nest boxes last week, on the corners of the greenhouse. Two of them look like there have been inspection visits at least. Unfortunately the end of the gutter has come off during the install so we will need to get that fixed asap so as not to disturb the inhabitants.

The potatoes should already be ‘Chitting’ by now, although it’s so wet that they won’t be going in the soil for a while anyway.  They need to sit in the light for a couple weeks until the sprouts are well formed, traditionally in an egg carton to keep them upright. All my egg cartons have gone into the compost, so I’ll have to think of something else, and I’ve just remembered last year’s drama in the greenhouse so I’ll need protection.

Last year I started earlier and I used seedling flats to lay the 40 or so potatoes out. The next morning I was shocked to see empty flats, and only one slightly damaged potato on the ground beside the bench.

I knew right away it must be the rat – he steals the soap if it’s small enough if we leave it out, or leaves teeth marks in it if it’s larger. But I didn’t think he would eat raw potatoes and especially not 40 in one night. After a bit of thought I realised that although there are plenty of holes in the greenhouse there were none large enough to easily get the potatoes out, and sure enough a few minutes search revealed them carefully stored inside a couple of hollow concrete blocks covered by a waterproof cover. A few which didn’t fit were piled out of sight next to the blocks.

He must have worked all night, moving each potato out of the flat and over to the edge of the bench, pushing it off onto the ground, rolling it across to the blocks, and then lifting and pushing it up over the top of the block and down beside the edge of the battery. It was such a complete job, so carefully done. The completionist in me could understand how he had pushed himself till dawn, getting all but the very last one, or maybe rejecting it because it was damaged in the fall from the bench.

But seed potatoes are not cheap and it’s not good to encourage this sort of thing. I will have to work out a way to protect them or take them back to the city.

The reason my potatoes are late is because I ordered summer bulbs with them, some of which were late getting to the supplier.

In the box should be:
Tuberose – The Pearl (2 Bulbs)
Gladioli – Callianthus (15 Bulbs) – these have a whole bunch of different names, I think a lot of people know them as acidanthera. I had never heard of them before, but according to Sarah Raven they were a popular Victoran cut flower. They don’t look much like gladioli to me, much prettier and they are scented!
Dahlia Decorative – Cafe au Lait x 1 – this is a cream colour with pretty pointed tips
Dahlia Decorative – Eveline x 2 – this is a lovely cream with mauve tips
Dahlia Decorative – Akita x 3 – This looks to me almost like a fancy chrysanthemum, a rusty coloured base with pale yellow tips. I hope it’s as nice as the picture.
Dahlia – Cactus Mix x 8 Bulbs
Gladioli – Nori x 5
Gladioli – Priscilla x 5
Gladioli – Euro Clown x 10
I haven’t grown Gladioli before, these look to be smaller and less show-stealing than the ones Dame Edna favours. They could be nice mixed with other plants in the Coral garden.

C tells me that today is the Great Sharpening, so I had better get out and line up my tools.

One thought on “Sun, starlings, seed potatoes and summer bulbs”