A bit over a month ago an enormous buzzing brought me running to see the sky clouded with bees, which quickly started to coalesce into blobs on the trees. 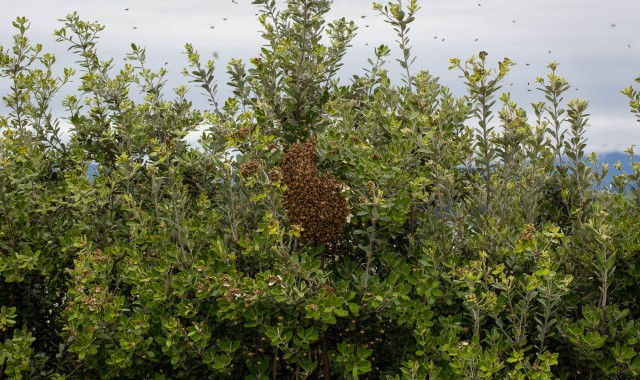 After about 15 minutes they had settled into two biggish blobs on trees a few meters apart. We thought we had probably already had one swarm from Beresford’s hive, so we didn’t want to lose any more. Quickly setting up a ladder we collected the two blobs into buckets, and tipped one into a new hive, and the other into a new super separated by a sheet of newspaper from Eleanor’s hive, which wasn’t doing as well and had seemed more susceptible to Varroa.

The bees from Beresford’s hive were still milling around by the entry, cleaning each other and forming chains. Finally they started moving back into the hive in an orderly fashion, like a crowd going into a concert. 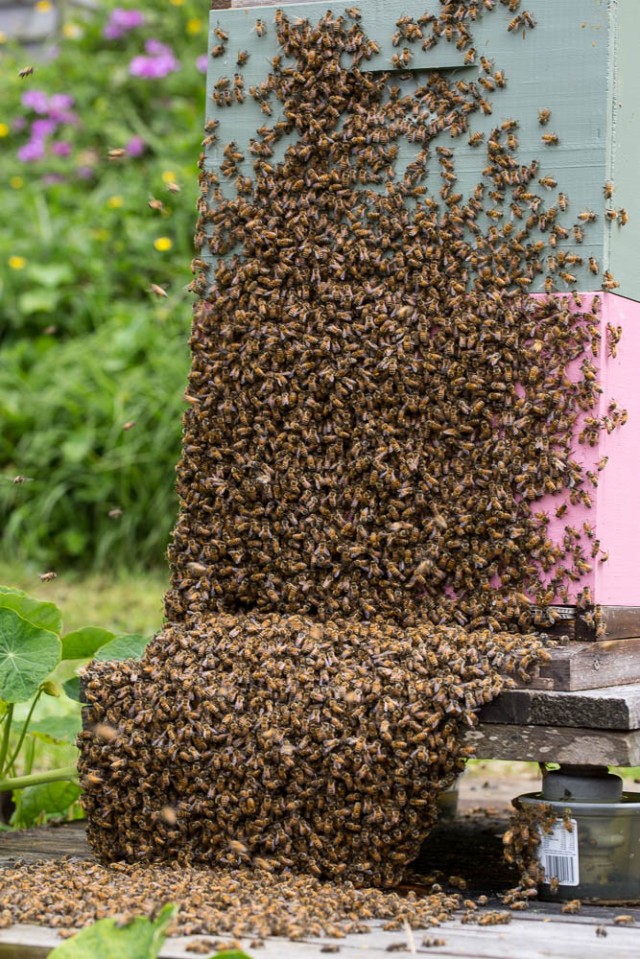 It turned out that there was no queen in the blob which went into the new hive – all the bees gradually left, presumably either back to Beresford’s or into Eleanor’s through the front door, where a war was now going on.
The idea is that the new queen goes through the newspaper and takes over the hive. We think this is what happened, as after the skirmish was over the hive started to increase massively in busyness. The following week the top super was empty, and the newspaper had been eaten away. We replaced the super, but the frames were clumsily arranged so now the comb is becoming a bit freeform.

However Beresford’s hive didn’t seem to be doing quite as well, and when we opened it a few weeks later there was plenty of honey, but no brood.

We guessed that the new queen may not have started laying yet, but we added a frame of brood from Eleanor’s now healthy and well stocked hive just in case they needed to raise another queen. It turns out we didn’t need to worry. We opened the hives last week and found a happy queen and lots of brood and honey in each.
Eleanor is now elegant and dark, obviously her mother met a lovely dark Carniolan prince.

They are raising some more boys – drone brood bumps out to fit the larger male bees.

Honey and brood are starting to fill all the frames. There is a tiny egg in the base of each of these cells.