This week I have so many scented flowers you would think it would be overpowering, but they blend together to make a perfume. We seem to run out of scented flowers at the end of Summer, and it’s a nice change when the cooler weather brings the scented bulbs and shrubs. 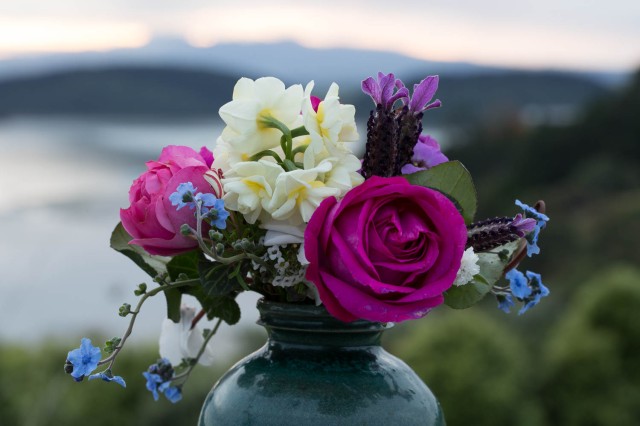 It was a dark morning; although it’s not technically the solstice for another 2 days, the day length in minutes is as short as it’s going to get, and it was cloudy.

The perfume is made up of roses Chartreuse de Parme, and one rather battered Gertrude Jekyll, both strong ‘fruity’ scents. The first of the older Narcissus ‘Early Cheer’ is the strongest individual scent. One flower of Daphne ‘Perfume Princess’, some Alyssum, and Wallflower ‘Bowle’s Mauve’, make up the rest. Daphne ‘Perfume Princess’ is a year old, the first Daphne I have ever kept alive for more than a season and it is really thriving under a plum tree.

There are some tiny Oxalis flowers in the vase. These are special Oxalis – not the ones with the clover like leaves that are a weed. They only open up in the sun, but they are very pretty even when they are rolled up. One of them is called ‘Peppermint Stick’ because of the way the red edge of the petals creates stripe of red and white when it’s rolled up. They are working well as underplanting for roses together with Thrift, Freesias, Dutch Iris, and Sisyrinchium ‘Devon Skies’ (blue-eyed grass). 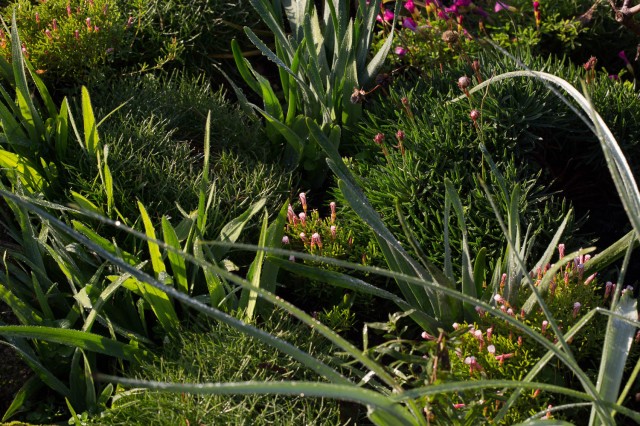 There is a sad story around the cyclamen flowers.

I’m unsure of whether it was jealousy or frustration that possessed Mac the dog. We had a young friend visiting, and Mac had been digging a big hole after a rat tunnel and was filthy, so I left him outside until I had time to wash his feet. Next thing I heard a hedgehog screaming.  When I ran outside the torchlight revealed an area of garden completely devastated, cyclamen flung in all directions, with a hedgehog hunkered down in the middle of it. The rescued hedgey will likely survive but I don’t know that I will get any more cyclamen flowers this year.

Cathy has a wealth of purple Iris ensata in her vase over at Rambling in the Garden this week.