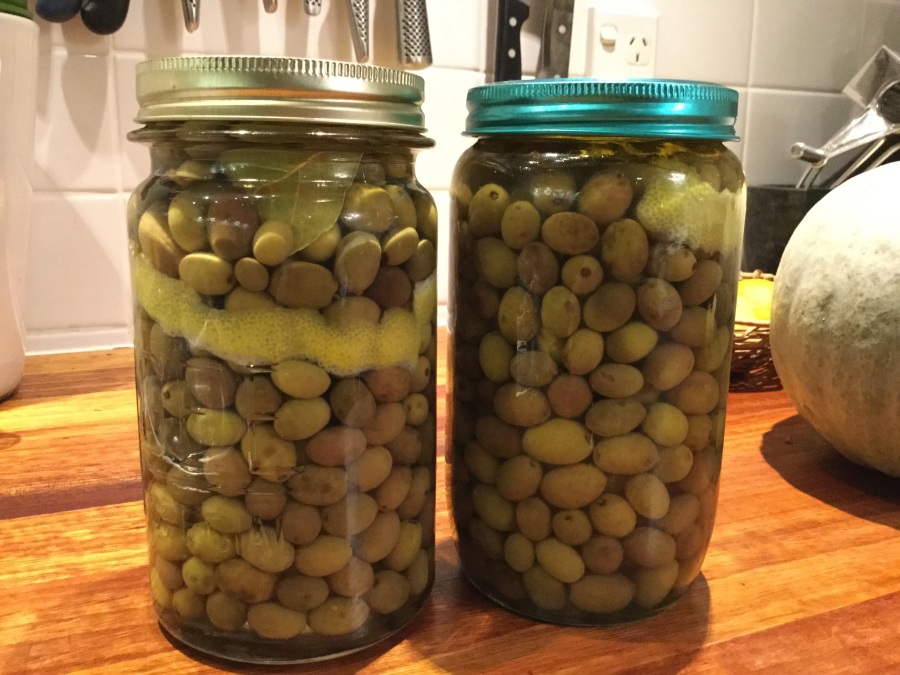 These olives are almost the last of a big batch which have been sitting under the table for the last year in jars in a box with a towel over it. The brine has to be changed every so often and if they were hidden away in a closet it would never get done.

I’ve been transferring them into smaller jars with bay leaf, lemon rind and peppercorns and then a layer of olive oil to keep the air out. I did intend to add coriander seed but deciding they smelled stale I threw them out the door where they quickly turned into a small forest of cilantro. We have been enjoying both the cilantro and the olives. The olives are firm and salty with a deep taste from the bay leaf, perfect with cheese or wine.

As the Olive Curing recipe on Hunter Gardener Angler Cook says, ‘brine-curing olives is stupid easy’. All you need is rain water, salt, vinegar, and some big jars with something like a smaller jar to put in the top to keep the olives down in the brine. And olives of course. We put sheets under the tree and shook and picked  – it might have taken an hour to get enough for 6 or so very big jars.

One mistake I made was to use a big stainless steel pot as well as the jars. Although the pot and handles were stainless apparently the rivets attaching the handles were not. The olives were not affected as the rivet was on the outside but the pot is somewhat less useful with rope handles.